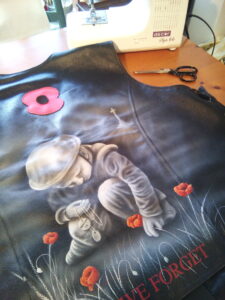 Remembrance Day has taken many forms in our house over the years.  When the boys were part of Boys Brigade and Scouts, many times we were part of the parade underdressed in lots of layers to protect against the cold.  The one year we didn’t take large teenager (too grown up to come) we had a panicked phone call mid service as he had decided to come into town and find us at the cenetaph as he felt all weird at home by himself.  Most of my married life has been military living and we have endured our share of losses over the years.  Hubby has latterly changed his uniform to biker leathers as part of the British Legion and had a seat right at the front of church while the rest of us squash at the back with standing room only!

As a consequence of now being a biker’s spouse, I have found myself persuaded into sewing on patches to his jacket, which has expanded into  a small stream of bikers passing through the shop door leaving their precious leather cuts for me to lovingly sew on patches after biker night!

Sewing these patches on is a year round reminder, not just a November thing, so a big thank you to all service personell and their families wherever you are.

We will remember you as well as the fallen.

This site uses Akismet to reduce spam. Learn how your comment data is processed.