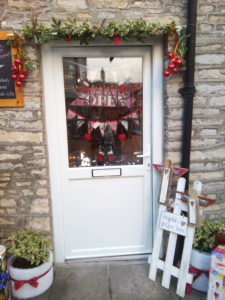 I know it’s actually Christmas Eve Eve, but a very Merry Christmas to all my customers near and far, regulars and visitors to the town.  Here’s hoping your Christmas weekend is a happy one for all of you. Thank you for supporting me all year. 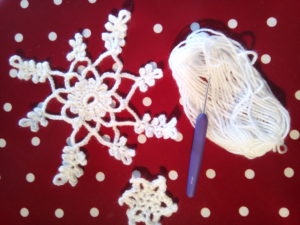 Well our crochet snowflakes class was a hit! We had so much fun I forgot to take photos and I even had to put a sign up in the shop for customers to ring the bell if we couldn’t hear them enter.  There was a real mixture between intense quiet periods of concentration and manic laughter!  A lady who really struggled to feel she had accomplished much at the last session turned up with a bag full of finished granny squares and half a scarf, so she really inspired another who, as a knitter, was having a hard time re-skilling for crochet.

The human spirit is amazing; one minute we can be seriously disheartened (last time’s crochet was going out the window) followed by gales of laughter, tears of joy or rather a lot of naughty words that bring a shared understanding of our frustrations, but whatever it is, the support and encouragement of a group of women can be a force to be reckoned with. 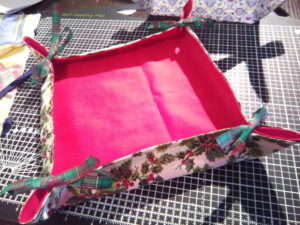 Fabric storage boxes are fab! As we had a super time making fabric foldy boxes at the workshop this week!  There are three ladies that enjoy each others company and love to make something each month.  One lady has made rather a lot more at home and found some paper napkins to add as gifts so that’s her Christmas pressies sorted! We had fun with a candle sealing the ribbon ends and thankfully didn’t set fire to the shop in the process. We also found that ironing on interfacing was a better choice in making the boxes stiffer and more durable.

Whatever you are up to, enjoy your sewing time. 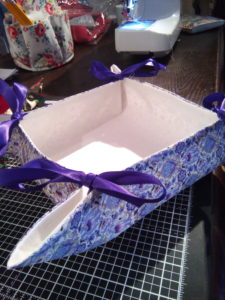 Remembrance Day has taken many forms in our house over the years.  When the boys were part of Boys Brigade and Scouts, many times we were part of the parade underdressed in lots of layers to protect against the cold.  The one year we didn’t take large teenager (too grown up to come) we had a panicked phone call mid service as he had decided to come into town and find us at the cenetaph as he felt all weird at home by himself.  Most of my married life has been military living and we have endured our share of losses over the years.  Hubby has latterly changed his uniform to biker leathers as part of the British Legion and had a seat right at the front of church while the rest of us squash at the back with standing room only!

As a consequence of now being a biker’s spouse, I have found myself persuaded into sewing on patches to his jacket, which has expanded into  a small stream of bikers passing through the shop door leaving their precious leather cuts for me to lovingly sew on patches after biker night!

Sewing these patches on is a year round reminder, not just a November thing, so a big thank you to all service personell and their families wherever you are.

We will remember you as well as the fallen. 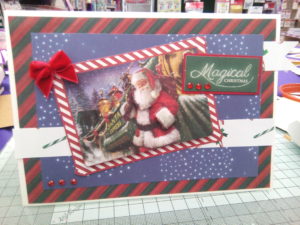 There is such a fine line being in retail on the issue of Christmas.  Talk to the crafters and they will tell you that by the end of January, they have all their cards made and ready.  Some finish theirs on their holidays in July in the caravan and take cases of paper and die cuts with them.  I was asked for Christmas fabric before Easter last year (I had only just put it away)!    Then the non crafters tut at me for having a quiet stash on the table under the stairs in September that will gradually creep out “Christmas? It’s not even November yet”!  The good news is that over the year I learned to just keep Christmas under the table, accessible enough for crafty makers and hidden from the shoppers.  I can probably guarantee that I won’t be ready for Christmas when it comes and will end up sending shop-bought cards which will be embarrassing for a die hard crafter!  Nevertheless, whenever you enjoy your Christmas making, I will probably still be thinking about buying more sparkly and glittery stash!

Something I have been wanting to get around to since I opened the shop was make bags from the rather large stash of vintage and rescued fabrics that have accumulated over the years.  Finally, recently, I have achieved this! Must say I am learning as I make each one and my zips are certainly improving each time!  I took the leap of ordering some fabric labels to give them a bit more kudos in the ‘unique’ line, as there will be no two the same due to the remnant nature of my stash.  Workshops for these will be available in the New Year as Christmas is now taking over the studio.  Look out for the Mad Old Bag range any day now!!

There are no upcoming events at this time.